The LumberJack character was created in Character Creator – CC3, and further animated using iClone. The voice actor was created from artificial intelligence thanks to the Replica Studios – AI Voice Actors software. The Replica audio was imported and combined with AccuLips and Explus features to enhance the facial expression.

Check out this Exclusive interview with Rob Crabtree and Reallusion (Translated from the original interview in German).

This time Rob Crabtree shares with us his story and his character animation “LumberJack” which won the iClone LipSync Animation Contest 2021.

Reallusion: Hi Rob! Welcome to the Reallusion Blog. Tell us a little bit about yourself.

After studying photography and animation, I directed music videos and commercials in London before creating award-winning film trailers and opening credits for some of Hollywood’s top films. During my time in the film industry, I discovered how expensive and time consuming working on films with actors, large sets or locations can be. It was then that film technology went from analogue to digital and the first Macintosh was introduced (before the Internet). At that time, the hardware and software for creating digital 3D animations was still very expensive. That’s why I always valued an original concept and the visualisation of the look and feel in a storyboard or in keyframes. It was important to be able to communicate the concept and final look with clients and other professionals on the team in order to produce the project efficiently and on budget.

After my valuable time in the film business in Hollywood, I concentrated on developing my own ideas and projects after moving to Europe. I am the owner and creative director of Europafilms, an independent creative studio. Our specialty is creating concepts for compelling brands and telling stories through film, photography, visual effects and animation.

I was looking for a way to add 3D characters and digital people to our short films and photo projects. Character Creator and iClone offered a solution to create virtual characters in any pose and add them to our professional 3D renderings with iRay.

We found iClone particularly useful for blocking live-action actor sequences for our short films and commercials. While the software is a bit sophisticated, we’ve found it to be intuitive and works well with the other programs in our pipeline. Over the past three years and with the latest pro enhancements from iClone and Character Creator, we’ve seen how realistic and cost-effective digital humans can be in our films.

Technology is constantly evolving and in many high-end films, and particularly visual effects shoots, it is almost impossible to distinguish between real actors and digital actors. Our focus at Europafilms is on developing our virtual production pipeline for projects. Reallusion’s products complement our workflow and offer seamless integration with other professional applications and software.

R: Also, please tell us about your participation in the “iClone Lip Sync Animation Contest 2021” and your idea to create “LumberJack”.

Above all, the goal was to facilitate the creative process and quickly create animations in iClone. The LumberJack character was created in Character Creator in less than 2 hours and then exported to iClone. We spent about an hour writing a simple script that was used with an appropriate voice in the Replica Studios – AI Voice Actors application. The audio download was imported into iClone and processed with AccuLips and the Explus function for the appropriate facial expression. Within minutes we had the first animated pass of the scene.

Back to Character Creator to add some dirt and grime layers and the LumberJack character was done. Then it went back to iClone to tweak the animation and facial expressions. This can take some time, so less is more and you need to know when to stop. R: What other software did you use in this animation?

After the performance of the LumberJack character was completed in iClone, the final artwork was rendered as an image sequence, and Adobe After Effects was used to create the final background, smoke, spark effects, and final artwork. Adobe Premiere was used to edit the sequence and add the final audio mix.

R: Do you have any tips for users who are new to the world of 3D animation?

Download a free trial of iClone and Character Creator and follow the beginner tutorials on Reallusion YouTube channel. There are also many free 3D programs like Blender or Daz Studio, all of which have a strong community of users of different levels and abilities, who also offer tutorials. Art Station or CG Society are also great places to post your work in progress and spot some of the best emerging talent.

There’s also Pixar in a Box. A free online course with tutorials provided by Pixar Studios and Khan Academy that new users may want to try. You can focus on and perfect a specific aspect of the animation, e.g. B. character development, concept and environment design, modelling, texturing, lighting or the animation and movement of characters. Either way, Pixar in a Box provides a comprehensive overview of animation, walking you through the filmmaking process and techniques involved.

An ending sequence in a film can require the collaboration of many specialists to create top-notch animation. So start with something simple, make it perfect, and work your way up from there. For reference, you should spend a lot of time observing the real world around you to understand timing, depth, textures, lighting, mood, and movement.

R: Do you already have plans to further develop “LumberJack” or to realise other projects?

LumberJack was specially created for iClone Lip Sync Animation Contest 2021, but we can continue to develop his character. We’re in the process of designing a few more characters as part of a larger project to be released later. Character Creator and iClone will play key roles in the development of our virtual production, so we’ll keep you posted.

Character Creator has become an essential tool in our production pipeline for 3D character and Digital Human creation. Reallusion has enabled us to produce realistic characters, Digital Humans and high quality animation for any scene we can imagine. Making it an intuitive experience to block out our ideas and then to further refine the process for either stills, film or video output. 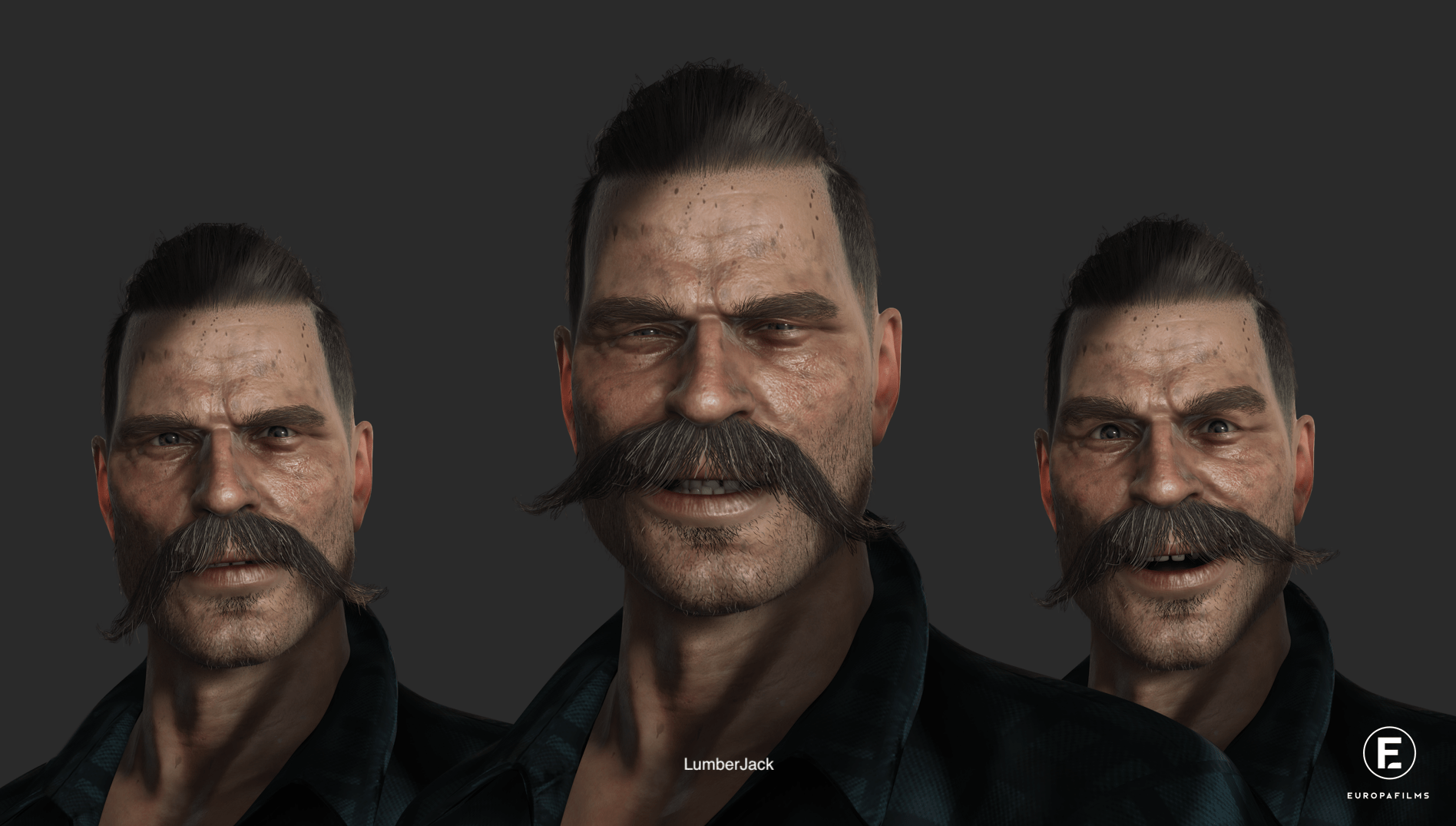 END_OF_DOCUMENT_TOKEN_TO_BE_REPLACED

When an iconic brand like Porsche crosses our path, it triggers a sense of pride and ignites our inner creative passion to do great work to capture the brand. After meeting the Porsche Taycan Turbo S for the first time, it was clear that the iconic Porsche design would not only spark the imagination, but resonate with your inner core. The feeling was instant, this was a pure cinematic moment. A shot of creative adrenaline for us to shoot the kind of photography that would elevate the Porsche brand to new heights. This was our inspiration, our elevated mood as everything was aligned that evening. The location locked down, weather, atmospherics and the natural sunlight were all in perfect formation for our shoot for the Porsche Taycan Turbo S.

END_OF_DOCUMENT_TOKEN_TO_BE_REPLACED

Are you ready to collaborate in creating a completely new realm of possibilities? Yes, that is a massive statement and we are stepping up to create this fresh set of challenges.

If like us, you are tuning into the great awakening that is in full force on all dimensions simultaneously and feel that we are on the cusp of experiencing a new era in positive creative thinking. Buckle-up. We are in for a ride.

END_OF_DOCUMENT_TOKEN_TO_BE_REPLACED

For all players and fans of the game, FORTNITE – STARTS HERE.  Europafilms created an action trailer for the game Fortnite. The edit was inspired by one of our own music tracks 2 Weeks Off.

The trailer features 3D animation sequences and visual effects from the original game trailer launch by Epic Games as well as Actual Game Play.  The popular action game Fortnite features in Episode 01 of SHOWCASE by NXT Studios. NXT Studios is a a decentralised Entertainment Studio to SHOWCASE Creative Artists, Technology, Lifestyle Trends and Beyond.

END_OF_DOCUMENT_TOKEN_TO_BE_REPLACED

With over 8 years working on top Hollywood Film Trailers, EUROPAFILMS creative director Rob Crabtree guides the new Land Rover Defender through what appears to be an Impossible Set of Off-Road Challenges.

After owning 2 Land Rover Defender 110  vehicles, I was impressed by the new Defender 2020 re-design and product launch.  So much so, I was inspired to create the film THE CALLING.

END_OF_DOCUMENT_TOKEN_TO_BE_REPLACED

europafilms animation, character design, film Permalink
We are working with Brad Pitt. Or at least with his digital 3D persona. With Reallusion CC3 and Headshot, we are able to create fully-rigged, walking and talking Digital Humans and Characters for Games and Animation projects. This technique is intuitive and a great addition to our animation pipeline for producing digital assets.

END_OF_DOCUMENT_TOKEN_TO_BE_REPLACED

We take time to plan our shoots and a major part of that is finding great locations. After our pre-production and planning the excitement builds as the location shoot day draws near.At Europafilms, we have always favoured a holistic approach to capturing cinematic film and photography shots.  For us, it is about timing and setting up and waiting patiently for the perfect moment to capture each shot.

END_OF_DOCUMENT_TOKEN_TO_BE_REPLACED

europafilms animation, automotive, creative, film, photography, visual effects Permalink
We followed our passion for luxury brand cars and launched our Automotive services, offering car photography, 3D rigged model animation and more. We can take any vehicle and create any location, either with location photography, car photography or make everything in 3D, fully rigged and ready to drive. Our high value assets are used in…

END_OF_DOCUMENT_TOKEN_TO_BE_REPLACED

europafilms agency, locations, photography Permalink
It is no secret that professional photography sells products. In the real estate sector we have created a niche set of services based upon high value photography of both interiors and exterior locations. This resulted in direct sales of…